Frogville is an award winning co-op of musicians, songwriters, painters and photographers that has been amazing fans since 2003. The Frogville recording studio has the best drum room around and all the analog gear, microphones, pianos, keys, tube amps a band needs to make a great record, all on top of a hill overlooking Santa Fe. Frogville has been nominated for dozens of  New Mexico Music Awards over the last 15 years and won 17 awards including album of the year twice, best recording engineer twice, best rock album five times, best country twice, best Native American twice, best folk and best religious/gospel. 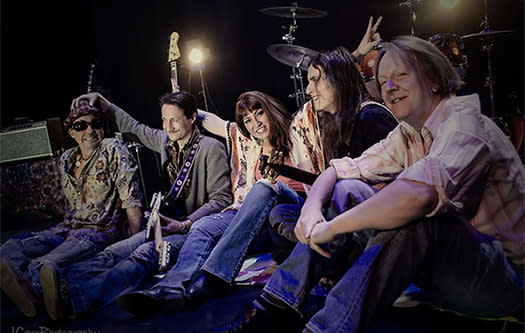 Free Range Buddhas started in 2016, as a collaboration between Santa Fe's sultry powerhouse vocalist and songwriter Francesca Jozette and seasoned Seattle rocker Matt McClinton. In the spring of 2017, the duo released a self-titled EP, for which they hired some of Santa Fe's top session players. The Free Range Buddhas EP received many positive reviews, as well as an award for Best Pop album of 2017 from The New Mexico Music Awards. The singles "Foolish Me'' and "Toss Me Out" remain in rotation on Santa Fe's FM radio 98.1 KBAC. After such a positive reception, the duo decided to expand into a full blown band.

The music of Free Range Buddhas is a spirited blend of folk-rock, psychedelic pop, and good old American rock and roll in all of its glorious forms. They have been likened to such bands as Fleetwood Mac, Jefferson Airplane, The Grateful Dead, and CSNY. Francesca Jozette writes songs with an essence of mysticism, raw emotion, and tenderly soulful vulnerability. At the same time Jozette's lyrics are clever and catchy, the band's grooves make you want to boogie, the guitar lines have a western sparkly space phaser quality and the overall energy of the band is genuinely contagious. Free Range Buddhas aim to emulate a classic timeless vibe while embracing their own unique modern sound. They want to feed the soul, nourish the spirit, and keep your feet dancing all night long!

Also on the bill: