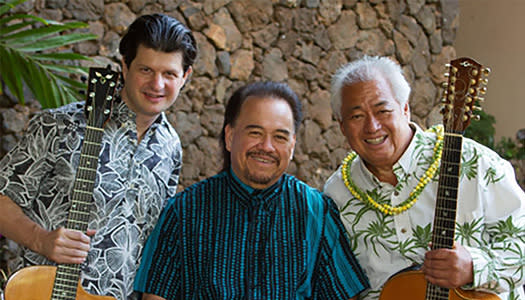 We are opening up our COVID restrictions as much as possible within the constraints imposed by artists and venues.  For this show there will be no vaccination or negative test requirement.  Masks are strongly encouraged, but not required.

We are offering a Ukulele Workshop with Uncle George and a Slack Key Guitar Workshop with Jeff on Sunday, March 13 in the afternoon.  The workshops will be at The 377 Brewery near the airport, so you can work on your Hawaiian music skills AND get a beer!

Three slack key masters bring Hawai'i's unique folk styles, with origins in the early 19th century Hawaiian paniolo (cowboy) culture, to 21st century stages. They themselves grew up in rural areas where immersion from childhood in Hawaiian music and culture was both entertainment and education.

Master slack key guitarist George Kahumoku Jr. is known as "Hawai'i's Renaissance Man": a four-time Grammy and multiple Na Hōkū Award winner, he is also a vocalist, storyteller, and songwriter. For this show, he is joined on stage by two other luminaries for an evening showcasing Hawai'i's lilting and lovely folk styles, with origins in the early 19th century Hawaiian paniolo (cowboy) culture.

The winner of multiple Na Hōkū Awards for Best Slack Key Guitar, virtuoso Jeff Peterson is a star of the next generation. Five of his songs are featured in the award-winning George Clooney film "The Descendants." Born on the Island of Maui, he was introduced to the rich heritage of Hawaiian music by his father, a paniolo on the Haleakala Ranch.

A slack key guitarist, lap steel guitarist, vocalist, songwriter, and producer, Sonny Lim developed his styles performing with the famous Lim Family of the Big Island. He was also one of the early members of the renowned Makaha Sons of Ni’ihau, for whom he played lap steel guitar beginning at age 15. He performed on the first Grammy-winning album in Hawaiian music, and has won multiple Na Hōkū Awards.