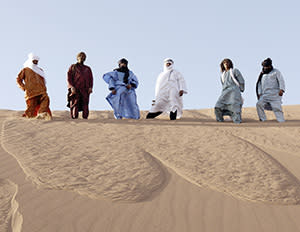 While Tinariwen were busy criss-crossing the globe on their recent triumphant tours (160 concerts played in the past three years), expanding their audience on all five continents, becoming one of the latest musical phenomena of truly universal calibre, the frontiers that encircle their desert home were closing down and double-locking, forcing them into exile to record their 8th album, Elwan.

Over the past five years, their beloved homeland in the Adrar des Ifoghas, a Saharan mountain range that straddles the border between north-eastern Mali and southern Algeria, has, in effect, been transformed into a conflict zone, a place where nobody can venture without putting themselves in danger and where warlords devoted either to jihad or trafficking (sometimes both at the same time) have put any activity that contradicts their beliefs or escapes their control in jeopardy. Even though the 12 songs on their latest record evoke those cherished deserts of home, they were recorded a long way away from them. And, as a result of this separation, at a time when the political, military and humanitarian situation in the region has never been so critical, the feelings and the emotions that the band managed to capture on record have never been so vivid.