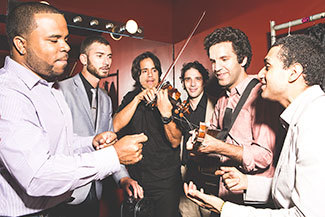 Brooklyn's Los Hacheros, modern-day torchbearers of the Golden Age of Latin music, revives folkloric styles like son montuno, guaracha and salsa, and often combine them with Bomba, a fiery rhythm from the mountains of Puerto Rico. "Los Hacheros has the magic of group improvisation," says bassist William Ash.  "We play in a style that is swing oriented and emphasizes the Cuban clave like great ones of old: Arsenio, Reve, Ritmo..."

Their debut album Pilon was a well-received introduction to the band and received critical praise from tastemakers including Wax Poetics, Vibe Magazine, and The Washington City Paper, amongst others. Wax Poetics states, "The groove to this music is deep," while The City Paper boasts, "...its solid arrangements and lively original songs have impressed old-school salseros and young music fans alike."

Los Hacheros recorded their sophomore album Bambulaye live to vintage analog tape, giving the music a raw, but warm and open sound similar to the Latin legends that have inspired them. "Bambulaye was recorded to be gritty, driving, and infectious, with the goal to get you up and dancing from first listen," says producer/guitarist Jacob Plasse. "I wanted this record to feel and sound the way it does when we play our final sets at 3 AM, exhausted in East Harlem dives. Suddenly the band comes to life and all the old dancers are at it like it was 1970 again.  In those moments, we feel like we could play all night."