This show has been moved from Gig Performance Space to San Miguel Chapel. All original tickets will be honored. 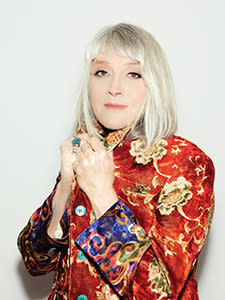 Kim Richey is a traveler. Musically, physically, emotionally. Not merely restless or rootless, it's who she is. Willing to follow where the music leads, she's landed in Los Angeles, Nashville, London, working with a who's who of producers—Richard Bennett, Hugh Padgham, Bill Bottrell, Angelo, Giles Martin. She's attracted a coterie of top-shelf genre-definers—Jason Isbell, Trisha Yearwood, Chuck Prophet, My Morning Jacket's Carl Broemel, Wilco's Pat Sansone—for her critically-lauded projects. She has also sung on records for Ryan Adams, Shawn Colvin, Isbell, and Rodney Crowell.

Part of what draws them to the dusky honey of her crystalline alto is the way she writes: to and from the soul, never flinching from the conflicts and crushing moments, yet always finding dignity and resilience. Her arc of the human heart is true. True enough that over the years, Richey's been both Grammy nominated. Nominated for Yearwood's truculently groove-country "Baby, I Lied," she also co-wrote Radney Foster's #1 "Nobody Wins."

"Harlan Howard said—and maybe I've taken it too much to heart, 'It's always more believable if you sing it in the first person.' And when I sit down to write, if it's something I'm going to sing, I want it to be what I want it to be. I don't really settle, which may make me a little hard to write with. But I have to be able to stand up and sing it night after night, and I can't if I don't really believe it."

After a nearly five year hiatus, Richey returned in 2018 with her eighth studio album, Edgeland. The term "Edgeland" is defined as the lost zone between urban and rural environments, a concept which mimics Richey’s constant fluctuation between the rigid genre definitions of country and Americana music. Richey naturally settles between the two, ignoring convention and instead allowing her own intuitive musical progression to shape her sound.