Sting: My Songs - SOLD OUT

BLANKETS/LAWN SEATING ONLY — NO CHAIRS ALLOWED

FOOD AND BEVERAGES AVAILABLE • ON SITE WATER STATIONS (BRING REFILLABLE CONTAINERS AND SEALED WATER BOTTLES) •
NO COOLERS • NO OUTSIDE FOOD OR DRINK •   SORRY, NO PETS!
ADA AREA WITH CHAIRS AVAILABLE

"Sting: My Songs" will feature many of the 17-time Grammy Award winner's most celebrated hits, both with The Police and as a solo artist. Fans can expect to hear "Englishman In New York," "Fields Of Gold," "Shape Of My Heart," "Every Breath You Take," "Roxanne," "Message In A Bottle" and many more.

Composer, singer-songwriter, actor, author, and activist Sting was born in Newcastle, England before moving to London in 1977 to form The Police with Stewart Copeland and Andy Summers. The band released five studio albums, earned six Grammy Awards and two Brits, and was inducted into The Rock and Roll Hall of Fame in 2003.

As one of the world's most distinctive solo artists, Sting has received an additional 11 Grammy Awards, two Brits, a Golden Globe, an Emmy, four Oscar nominations, a Tony nomination, Billboard Magazine's Century Award, and MusiCares 2004 Person of the Year. Also a member of the Songwriters Hall of Fame, he has received the Kennedy Center Honors, The American Music Award of Merit and The Polar Music Prize. Throughout his illustrious career, Sting has sold close to 100 million albums from his combined work with The Police and as a solo artist. 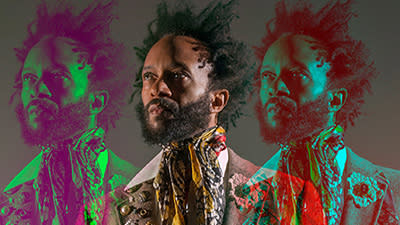 MISSED OUT ON STING TICKETS? YOU CAN STILL SEE FANTASTIC NEGRITO FREE IN SANTA FE ON SATURDAY, AUGUST 31 AS THE FINALE OF THE LEVITT AMP SANTA FE MUSIC SERIES  IN THE SANTA FE RAILYARD.

When you listen to Fantastic Negrito, you're invited to hear the story of life after destruction. Each song is a real story about a musician from Oakland who experienced the highs of a million dollar record deal, the lows of a near fatal car accident that left him in a coma, and is now in the midst of a rebirth that took him from the streets of Oakland to the Grammy stage. On the way he won the NPR Tiny Desk Contest and toured the world, playing alongside artists ranging from Chris Cornell to Solange to Sturgill Simpson.

Fantastic Negrito's latest release Please Don't Be Dead won the 2019 Grammy for the Best Contemporary Blues Album. "The last album was more observational," says Negrito. "On this one I'm bringing the fight."