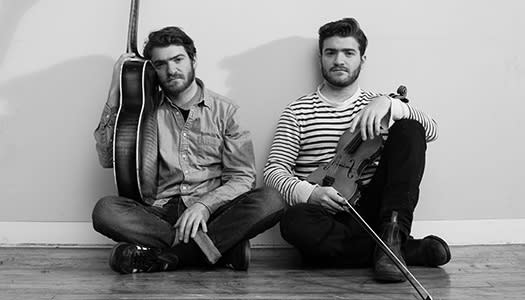 The Brother Brothers carry the folk tradition for a new generation. Identical twins David and Adam Moss honor contemporary aches with the nostalgic tenderness of another time on their debut full-length album, 2018's Some People I Know. Their stunning songcraft blends masterfully gentle guitar, cello and five-string fiddle with the sublime sort of two-part harmonies only brothers can carry. Their palpably fraternal stage presence and wonderfully familiar heart have earned repute among a modern folk scene; The Brother Brothers have recently opened for Big Thief, Lake Street Dive, Shakey Graves, and more.

Although young men, The Brother Brothers have boasted this sterling folk sound for decades. Growing up in Peoria, Illinois, they sang along as children to their father's record collection of the Kingston Trio, the Everly Brothers, the Beatles, and the Beach Boys. "That's where we learned to sing harmony and then one thing leads to another," says Adam. "All of a sudden we could harmonize to anything we wanted to. It was a very natural progression."

Speaking about their live shows, Adam says, "I feel like there's definitely like a living room vibe. Most of our experience before we were performing as a duo was, you know, sitting around song circles with friends, playing and creating a very homey, small-room environment."