Time: 7:00pm     Day: Saturday     Ages: All Ages
With the uptick in COVID-19 cases, the band was not comfortable coming together to record this concert. We'll find a time to do something with them down the road when things are a little more stable. Sorry about any inconvenience!
This Event Has Ended
Tags: alibi AMP Concerts online 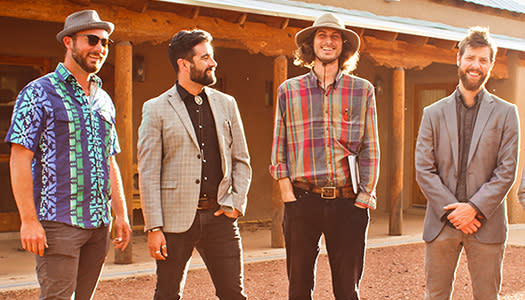 Everyone performing and working on the show is being paid.

Donations help us keep these projects going, particularly while we have no regular income!  (And are greatly appreciated!)

Known for their exceptional songwriting, unique covers, and pushing the boundaries of traditional bluegrass music, this "rowdygrass" ensemble balances high-energy, boot-scooting music with enchanting, soulful songs that will pluck at your heartstrings.

Formed in 2015, Silver String Band immediately captured the attention of the booming music scene in Albuquerque, NM. After a year of playing the brewery stage circuit, they released their first self-titled studio album in the fall of 2016, which led to notable local and regional growth as they made a name for themselves and embarked on a tri-state tour.

Their second studio album, Keep Running, was released in the spring of 2018 and reflects on the toils of young adulthood, bucolic landscapes, and pays homage to a number of musical styles including bluegrass, grunge, punk, jazz, gospel, and country music. Currently, they are focused on writing new material with plans to record later this year. Notable SSB performances include the 2018 Route 66 Summerfest, the 2017 Wind Rider Mountain Festival, and the 2017/2018 ABQ Folk Festivals.