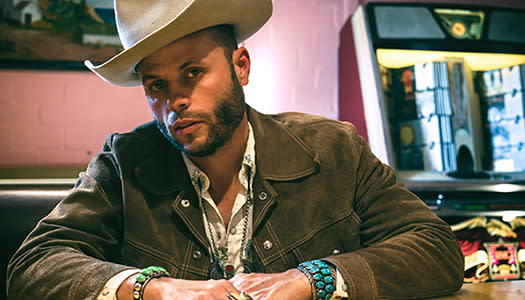 This is a standing room only show. There are no seats at the El Rey.

Charley Crockett is on one hell of a roll. His latest album, his third full-length in a little more than a year, Lil' G.L. Presents: Jukebox Charley takes the Texas singer-songwriter to some less explored corners of the classic country songbook. Among them are songs written by Tom T. Hall ("Lonely in Person," "I Hope It Rains at My Funeral"), Willie Nelson ("Home Motel"), and George Jones ("Out of Control").

Charley Crockett has been a fairly remarkable artist to follow. He's got a sound. He's got something to say. He has a look. And there's a gauzy veil of mystery surrounding him suggesting he knows more than he's letting on.

All those records in such a short amount of time have come with a "No Two Alike" guarantee: the darkly prescient Welcome to Hard Times; the semi-autobiographical, hard-core country-roots of The Valley; and 10 for Slim, his tribute of songs by the obscure and wholly authentic Texas honky-tonk maestro James Hand.

And still, despite his penchant for pearl snaps and western hats, Charley Crockett has managed to elude being pigeon-holed. Call him neo country-western if you'd like. It's true that few contemporaries present themselves as part of a lineage harkening back to Hank Williams and George Jones like Charley does, and even fewer can pull it off convincingly.