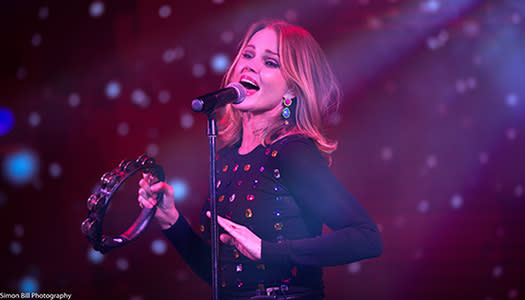 Before the show, Belinda Carlisle will be hosting "Chimps and Carlisle," a 20th anniversary celebration of the historic rescue of 266 chimps from NM's Coulston laboratory. $25 tickets benefit Animal Protection of New Mexico and Save the Chimps. The event will be held at APNM, 1111 Paseo De Peralta, Santa Fe. Tickets and information are available at https://www.eventbrite.com/e/chimps-carlisle-tickets-428576813787

Rock stars come and rock stars go. In an ever-changing landscape of shifting musical trends, few artists stand the test of time. Belinda Carlisle is one of those rare talents who continues to remain relevant after nearly four decades in the business. Amidst changing tastes, the gifted and glamorous singer-songwriter has indelibly touched the hearts of pop fans around the world with her unique blend of gutsy vocals, emotively charged melodies and picturesque lyrics.

With a multi-dimensional, internationally acclaimed recording catalog and countless tours showcasing her chameleonic musical prowess, the woman who began her career as co-founder and lead vocalist of groundbreaking all-female new wave/rock band The Go-Go's has amassed worldwide sales in excess of 15 million albums and singles. The Go-Go's played a pivotal role in setting the tone of 1980s pop with their self-penned, multi-platinum debut album, Beauty and the Beat. Buoyed by Carlisle's unmistakably emotive and edgy phrasing, the international top-10 singles "Our Lips Are Sealed" and "We Got the Beat" became enduring anthems for independent women from ages eight to 80 while redefining traditionally restrictive notions of so-called "girl groups."

When the Go-Go's went their separate ways in 1985 after three game-changing LP's (boasting further timeless anthems like "Vacation" and "Head Over Heels"), Belinda wasted no time in greasing the wheels for a solo career based on musical individuality and authenticity. Her commitment to her craft and her well-rounded approach to life have kept her going strong throughout her career, and she shows no signs of slowing down.