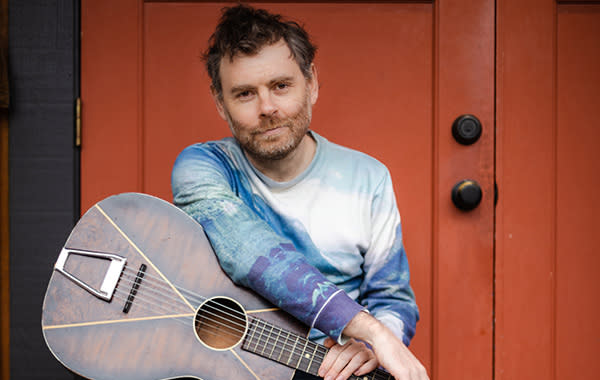 This will be a solo concert on piano and guitar. Yes, for the first time ever, there will be a baby grand on stage at Tumbleroot!

Composer/singer/songwriter Gabriel Kahane released Magnificent Bird in March 2022. The album, his fifth solo LP and second for Nonesuch Records, chronicles the final month of a year spent off the internet. In his most personal album since 2011's Where are the Arms, Kahane revels in the tension between quiet, domestic concerns, and the roiling chaos of a nation and planet in crisis. "Sit Shiva," the album's first single, out today, finds Kahane skirting the rules of his digital hiatus in order to mourn, online, the death of his maternal grandmother; in typical fashion, he mines not just pathos, but humor and grace amidst his family's grief.

In October 2020, the final month of his tech sabbatical, Kahane set out to write a song every day. "I wanted to create an aural brain scan at the end of this experiment," he explains, "and to give myself permission to write about small things, rather than trying to distill the enormity of the moment into grand statements."

Kahane lives in Portland, Oregon, where he serves as Creative Chair for the Oregon Symphony, for whom he composed, in 2018, emergency shelter intake form, an exploration of inequality through the lens of housing issues. This season, his piano concerto, Heirloom, was premiered by his father, Jeffrey Kahane, with the Kansas City Symphony; it will be heard again in Portland in March. Upcoming projects include an orchestral song cycle—for the Los Angeles Philharmonic and Cincinnati Symphony—further exploring his internet hiatus, surveillance capitalism, and the cascading consequences of our digital regime. The recipient of a 2021 Charles Ives Fellowship from the American Academy of Arts and Letters, Gabriel has collaborated with a wide array of artists ranging from Sufjan Stevens, Phoebe Bridgers, Blake Mills, and Paul Simon, to Brooklyn Rider, yMusic, and John Adams. He is a graduate of Brown University.