The White Buffalo is Jake Smith—singer, songwriter, guitarist, teller of stories, Emmy nominee; an artist whose voice—a timber-shakin' baritone of gravitas and gravel—seems directly linked to a greater truth; an artist who will not be swayed by fashion or curtailed by genre.

In April, The White Buffalo released the deluxe edition to his sixth studio album, On The Widow's Walk. Produced by two-time Grammy Award winner Shooter Jennings, the album was originally released at the cusp of the pandemic. Now finally able to support the critically acclaimed project with an international tour a full two years later, Smith revamps the record with four bonus tracks—three acoustic in-studio renditions of songs from the album that are backed by Jennings on piano, and the 2020 non-album highlight, "Guiding Light." On The Widow's Walk is perhaps Smith's most compelling statement to date, a collection of dark thrills.

With uncontrived, hand-crafted music now receiving increased levels of attention, music straight from source, the timing is perfect for this powerful, provoking new album and a fresh turn of the page. 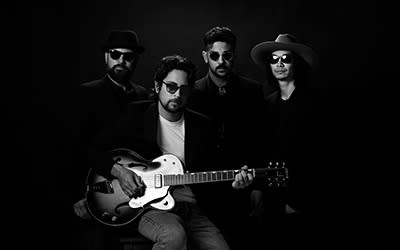 Formed in 2015 as a solo project after his tenure with the Smart Brothers, L.A.E. has recorded and released three albums: Secrets We'll Never Know, True Blue, and Blessings From Home. Backed by his band of brothers, he has toured extensively in the U.S. and Europe.