Aunt Kackle and the Coleslaw King

All ages. Beer and wine is available with ID. 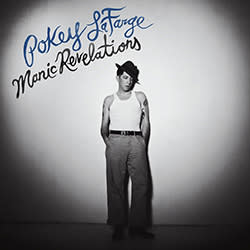 Pokey LaFarge [website | Amazon.com] is a musician. He is a storyteller. He is a feeler of feelings. He is a narrator of the messy, unkempt American experience. He sits, he watches, he writes. Everything that's worth happening happens in his songs. Like the long line of writers and performers he descends from, music isn’t something Pokey does—it's something he is.

This is why Manic Revelations shines like 10 daggers laying on the kitchen table in his St. Louis home. From that vantage point, in the center of this vast continent, Pokey takes long looks from shore to shore, feeling the direction of social winds, ingesting sights and sounds from all around, observing the news of the day.

And so he was ready for the evening when a sociological tinderbox caught fire. Mere minutes from his front door, night after night, social unrest caused everyone in America to stop and wonder which side they were on. In the face of this upheaval, Pokey took to his studio and began writing. That’s how artists deal with uncertainty: they bleed on paper until the pain subsides. Soon, he found that one song led to the next. He couldn't put it down. One manic revelation led to another. In the thrall of it all, an album started to appear in front of him.

"The manic revelation is the state where artists create," says Pokey. "I got to the point in writing these songs where I felt like a house on fire that just kept burning." 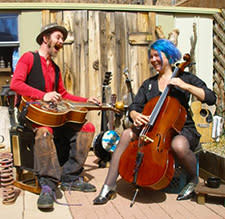 Grabbing the nearest slide dobro, ukulele and various bowed string instruments, Aunt Kackle and the Coleslaw King tell a story of indomitable spirit that is sometimes witty, sometimes dark, and always slightly oily as this duo project by members of Cloacas, Damon and Sabrina Griffith play a kind of bluesy timeless newfolk with patched tires. "...they presented the crowd with a delightfully unique style of folk which combined skillful craft, imagination, and a bit of humor." (Macca Lacca)