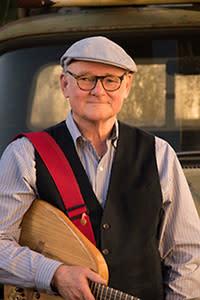 But there's even more to Adrian Legg's draw as an engaging, one-of-a-kind performer. Legg is a "genuine entertainer who excels at not only painting pictures, if not frescoes, and telling stories with music—but also wittily regaling his audiences with tales from his life and travels and his cogent and often oblique yet thought-provoking observations on a spectrum of topics. It's all part of his dedication to making his performances a full-blooded emotional experience." (Audio Magazine)

Over his career, Legg has released a dozen or more recordings of his original compositions, which are consistently described as thrilling, engaging, emotionally compelling and evocative. Legg encapsulates his own music by saying, "I'm a collision between European classicism and the American guitar."

Loyal fans around the globe enthusiastically appreciate Legg's witty, entertaining stories, often shared in between songs onstage and on his live albums. As noted by popular BBC radio personality Andy Kershaw, "Quite simply, there is no one else like him," citing Legg's "dazzling technique and equally large dollops of spirit, humor, passion, eclecticism and spontaneity."