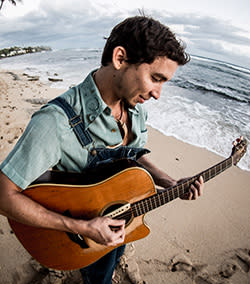 Described as "dazzling" by the New York Times, Makana is an internationally acclaimed guitarist, singer, composer and activist who is widely known for lending his musical talent for social change. He has been a TEDx talk presenter, and his guitar playing has been featured on three Grammy-nominated albums, including the soundtrack of the Academy-Award winning film "The Descendants."

Born and raised in Hawai'i, Makana grew up on the shores of Waikiki. Makana—whose name means "a gift given freely"—began singing when he was seven years old, took up ‘ukulele at nine and began learning the ancient art of slack key at eleven. By fourteen, he was performing professionally, and before long playing five nights a week. His reputation as the youngest virtuoso of slack key spread like molten volcanic lava throughout the islands.

A protégé of the Hawaiian Slack Key Guitar legends, including Bobby Moderow Jr. and the late master Uncle Sonny Chillingworth, Makana has dedicated his life to perpetuating as well as evolving the traditional Hawaiian art form. Makana has evolved his own dynamic, high-octane style, coined "Slack Rock": slack key infused with elements of bluegrass, rock, blues and raga. A contributor to the 2007 Grammy-nominated Hawaiian Slack Key Kings Vol. I and 2009 Grammy-nominated Hawaiian Slack Key Kings Vol. II, Makana is considered one of the "greatest living players" (Esquire) whose "instrumental brilliance bears comparison with the work of such groundbreaking acoustic guitarists as John Fahey and Michael Hedges" (Maui News).

Keith Sanchez and the Moon Thieves