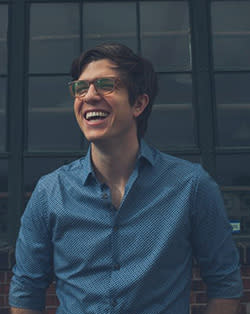 As a teenager growing up near Houston, Texas, Scott Mulvahill picked up the bass guitar on a whim. Natural talent and the lure of a challenge drove him to be the best musician he could and discover his love for singing, songwriting and the upright bass. After attending college at North Texas State University, Scott moved to Nashville, where his life changed after meeting American music icon Ricky Skaggs and joining his Grammy winning band, Kentucky Thunder. He toured with Ricky for over five years, and in that time, first started writing songs on his upright bass.

Scott describes his experience, "I started music as a bass player, but when it came to singing and writing songs, all my favorite writers played guitar or piano, and I just figured I had to as well. But while in Ricky Skaggs’ band, I started performing '20/20 Vision' in the show, which opened with just the bass and my voice, and it was a revelation. I realized that this sound, this concept could work, and I honestly wondered why I hadn't had the courage to do it before. So I started writing songs on the bass.  I tried to make the bass parts complete arrangements with harmony and rhythm, and weave my melodies between all that—the first song I wrote that way was 'Fighting for the Wrong Side.' And that's when the music became unique. Not for unique sake, but just because I was finally bringing all of my varied skills to the table and doing something that few others could, and it was where I felt I could give my best to the music."

Scott is currently touring in support of his September 2018 release, Himalayas, which was produced by himself, Charlie Peacock (The Civil Wars, The Lone Bellow) Gary Paczosa (Alison Krauss, Sarah Jarosz), and Shani Ghandi (Sarah Jarosz).