A Benefit for Santa Fe Prep 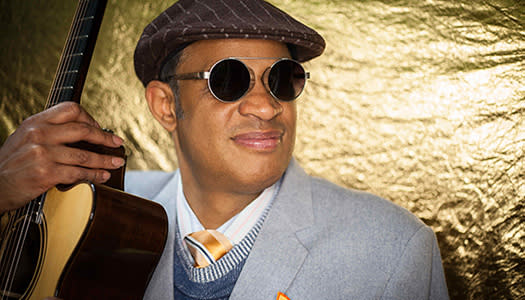 A limited number of VIP tickets will be available for $120 (plus applicable service charges). The VIP tickets include seating in the front section of the Lensic, along with a champagne and hors d'oeuvres reception with the artist at Herve Wine Bar (half a block from the Lensic at 139 San Francisco Street). The reception starts at 5:30 PM.

Hailed by the New York Times as "...a one-man band who turns a guitar into an orchestra and his voice into a chorus," Grammy-nominated jazz musician Raul Midón returns to New Mexico to celebrate his New Mexican roots at a benefit event for his alma mater's tuition assistance program for the under resourced at Santa Fe Prep and Breakthrough Santa Fe. Come join this exceptional opportunity as we honor retiring Head of School Jim Leonard's 21 years of leadership at Prep.

Along with releasing 10 studio albums as a solo artist, Midón—dubbed "an eclectic adventurist" by People magazine—has collaborated with such heroes as Herbie Hancock, Stevie Wonder and Bill Withers, along with contributing to recordings by Queen Latifah, Snoop Dogg and the soundtrack to Spike Lee's "She Hate Me." A native of New Mexico who was educated in the jazz program of the University of Miami—and who now lives in Maryland after years in New York City—Midón has earned acclaim the world over, with a fanbase that stretches from San Francisco to India, Amsterdam to Tokyo.

Ever since being told by some when he was a child that his blindness meant that "you can't do this, you can't do that," Midón has lived a life devoted to beating the odds and shattering stereotypes, learning his own lessons along the way. "As someone who has never seen, I've always felt at a disadvantage in that lyric writing is usually very visual," he says. "People really relate to images, and I've never seen images. But what I realized early on is that you have to write from what you know, and I hear, touch and feel intensely—and those are sensations and experiences that everyone can relate to."