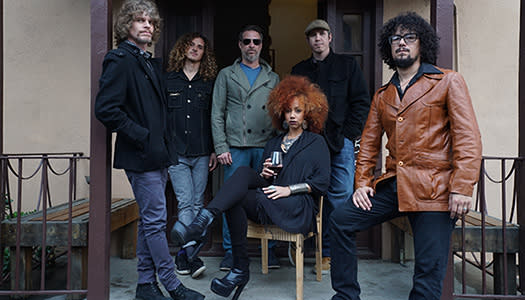 Due to the ongoing health crisis, we have cancelled this event and are talking with the artists about options for rescheduling.
We'll let you know as we have more info.

For nearly twenty years, ORGŌNE (a universal life force, pronounced or-gōne) has churned out gritty funk and soul recordings and toured relentlessly across the United States and Europe. Traditionally both the studio and live iterations of the band drew on a tight-knit collective of the West Coast's finest funk and soul musicians—although founding members Sergio Rios (guitar/engineer) and Dan Hastie (keyboards) have been constant anchors. However, since late 2013, Rios and Hastie have been joined by Dale Jennings (bass), Sam Halterman (drums), and singer/lyricist Adryon de León to form a permanent nucleus.

Establishing a solid core of musicians was instrumental in creating Reasons, their latest LP. "It allowed us to develop trust and be vulnerable with each other," says de León. From the a cappella opening of "All Good Things" to the dance floor filler "Easy Love," Reasons packs a punch. It's as if the listener is transported back to those sessions in Joshua Tree, staying up late and jamming with the band. As a producer, Rios shines: "I've learned to stop being so precious about every little detail. It's just art. Sketch your picture and move on."

Reasons is another solid step in a long and storied career. ORGŌNE's accolades are too long to list in entirety. ORGŌNE's live show captivates audiences and packs dance floors—whether it's on sold out headlining tours; sharing the stage with The Roots, Al Green, Sharon Jones & the Dap-Kings, and Galactic; or appearances at fests like Bonnaroo, New Orleans Jazz Fest, High Sierra, Bear Creek, and Jam Cruise. The well-traveled band has released albums on Ubiquity, Shanachie, and Colemine Records and served as the studio band on hits like Alicia Keys' "Teenage Love Affair" and CeeLo Green's Grammy-winning "Fool For You." Critics like NPR and Jambase don't shy away from heaping praise on a group with "irresistible funkiness and ability to transcend genre" (LA Weekly).