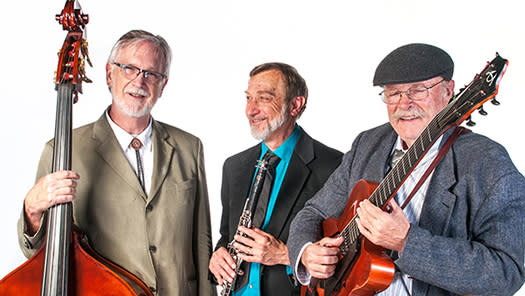 Everyone performing and working on the show is being paid. There will be no audience, just musicians, sound and video people who will follow social distancing guidelines.

Bobcats Trio—Bob Gusch, Dan Dowling and John Griffin—teamed up to play classic and contemporary jazz, swing, blues, and bossa nova. Their album Music For The Sole won the award for Best Jazz CD at the 2019 New Mexico Music Awards.

Seven-string guitarist Dan Dowling is a veteran jazz and blues musician who has been performing in combos ranging in size from duo to big band for the last three decades. Dan was one of the five finalists in the Heritage International Jazz Guitar Competition of 1996, and was named Best Unsigned Blues Artist in 1995 by the Nashville Music City Blues Society.

Bob Gusch, on woodwinds, has been a mainstay of the Albuquerque music scene, backing such greats as Clark Terry and Dianne Reeves. Locally, he has played with many bands, including the Albuquerque Jazz Orchestra, the Outpost Repertoire Jazz Orchestra, and his current Brazilian ensemble, Saudade. Bob likes to feature his clarinet playing with Bobcats.

John Griffin is a long-time acoustic and electric bassist with various jazz, blues, and rock groups. He has appeared with artists such as Bo Diddley, Eddie Harris, and Charlie Rouse.