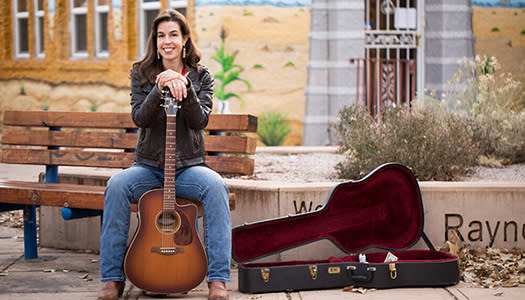 Presented as part of Arts Across America—a live performance series presented Mondays through Fridays to uplift & showcase artists from across the country. This event will be streamed and archived on the Arts Across America website, as well as on the Kennedy Center's Facebook page.

Thanks to the The New Mexico State Committee of the National Museum of Women in the Arts for their support on this project.

Award-winning New Mexican singer-songwriter Lara Manzanares teams up with traditional musician Jordan Wax and “zydetejano”- blues musician Felix “Gato” Peralta for an afternoon of songs and stories rooted in and inspired by the cultures, traditions, and rugged landscape of New Mexico.

Lara Manzanares is an award-winning bilingual singer-songwriter of Northern New Mexican heritage. In addition to singing the Mexican boleros, rancheras, and corridos of her sheep-ranching childhood, Lara also composes her own style of music in both English and Spanish. Through a combination of storytelling and songs both playful and sincere, Lara draws on her rural New Mexican roots and her urban experiences across the U.S. and abroad as she sings about love, loss, a sense of place, and her own connection to the land. Lara won best album honors at the New Mexico Music Awards for her album Land Baby.

Jordan Wax (violin, piano- and three-row accordions, mandolin, guitar, vocals) grew up in Missouri and was traditionally trained by master Ozark fiddler Fred Stoneking and Central Missouri dance fiddler John White. He worked as bandleader and accordionist for a Yiddish dance band for years before his work with Missouri and New Mexican fiddle styles inspired him to travel to Mexico for a 6-month immersion in Mexican huapango fiddling. He is a member of New Mexican string band Lone Piñon, whose music celebrates the integrity of their region's cultural roots.

Felix Peralta (a.k.a. Gato Malo) is the frontman for Felix y Los Gatos, a national touring band known for their unique style of "Zydejano"—a blend of Zydeco and Tejano styles, with dashes of blues, outlaw country and Santana-esque Latin soul. Gato spent his childhood watching his family play traditional New Mexico music in Albuquerque's South Valley. Now he channels the sounds of his ancestors through his music and songwriting. 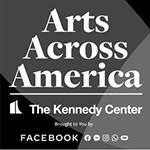 The Kennedy Center is the nation's designated cultural art center. It is its responsibility to showcase artists from communities and regions across the country. In this extraordinary time of uncertainty due to a global pandemic, and as the nation faces its history of systemic racism and oppression, this promise to celebrate all who contribute to culture of the US becomes paramount to addressing inequity and ensuring the livelihood of our artists and art forms. Through Arts Across America, we seek to offer a platform to exemplify togetherness through the arts and utilize our digital platforms to connect and uplift the stories and art of communities from across the country, while also providing support to artists.