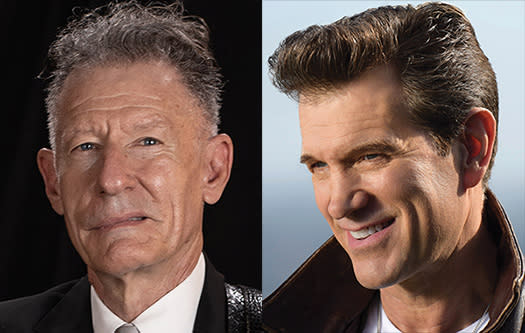 Tickets cost $66 & $98 (including all service charges). They are also available by phone through Hold My Ticket at 505-886-1251. The higher priced tickets get you access to the front section of the park.

A singer, composer and actor, Lyle Lovett has broadened the definition of American music. Coupled with his gift for storytelling, the Texas-based musician fuses elements of country, swing, jazz, folk, gospel and blues in a convention-defying manner that breaks down barriers.

Whether touring as a Duo or with his Acoustic Group or his Large Band, Lovett's live performances show not only the breadth of this Texas legend's deep talents, but also the diversity of his influences, making him one of the most compelling and captivating musicians in popular music.

Since his self-titled debut in 1986, Lyle Lovett has evolved into one of music's most vibrant and iconic performers. Among his many accolades, besides the four Grammy Awards, he was given the Americana Music Association's inaugural Trailblazer Award, and was named Texas State Musician. His works, rich and eclectic, are some of the most beloved of any artist working today.

Over the course of his three-decade plus career, Platinum-selling and Grammy-nominated singer and actor Chris Isaak has performed to sold-out crowds across the globe. His music and film credits include 12 critically acclaimed studio albums and numerous chart-topping singles, along with acting roles in several motion pictures, such as "The Silence of the Lambs" and "That Thing You Do!". His work has also taken him behind the scenes, creating music for multiple film soundtracks, including "Eyes Wide Shut," "True Romance," "Wild at Heart," and "Blue Velvet." Isaak has starred in his own critically acclaimed television series "The Chris Isaak Show" on Showtime, has previously served as a judge on "The X Factor Australia," and hosted the music talk show "The Chris Isaak Hour" on BIO.