AMP is excited to collaborate with FUSION in launching an exciting new downtown outdoor performance space—The FUSION Meadow! The Meadow is an expansive outdoor venue on the FUSION arts campus, with a 1500 square foot covered stage overlooking an outdoor space with a capacity of 1200. FUSION, home to the FUSION Theater Company, is a center for the arts and culture in Downtown Albuquerque with a multi-use venue, 35,000 square foot campus, three performance spaces, and indoor and outdoor event spaces. It's located just south of 1st and Lomas NW, at the northern terminus of the future Rail Trail—a mixed use path that will follow the Railroad from the Railyards to the FUSION space.

Cimafunk is by far the most exciting new faces in the Latin music space. Singer, composer and producer, the young Cuban sensation offers a bold mix of funk with Cuban music and African rhythms, which is currently revolutionizing the island's music scene.

Cimafunk is a cimarrón [fugitive slaves who settled in the wild to lead a free life in Cuba], a free being defying classification, a pilgrim in search of new musical miscegenation and the reunion of black music. By bringing out the best in Cuban rhythms and traditions and infusing sounds and styles from Africa and the U.S., Cimafunk is redefining contemporary Cuban music as well as Afro-Latin identity and the fusion of black cultures. Cimafunk has made a name for himself as one of today's great showman, performing an electric live show with his band from Havana. 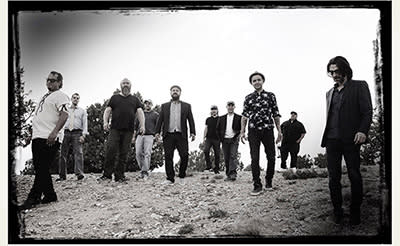 Nosotros has been drawing music lovers to their distinctive Latin groove for over 20 years. What began as a guitar trio in 1994 quickly took on a life of its own, becoming something that no one could have predicted, including becoming one of the most recognizable and original Latin bands in the Southwest United States.

The band's remarkable evolution over the years—taking on new members and leadership along the way—has resulted in the Latin music powerhouse it is today. The group seamlessly combines a myriad of Latin rhythms with elements of rock, salsa, jazz and cumbia creating an innovative and imaginative Latin sound that is, unique, undefinable and unmistakably Nosotros.

DJ Pancho will be on hand keeping the grooves going throughout the night.  Seems only fitting, since Pancho introduced us to the music of Cimafunk several years ago!