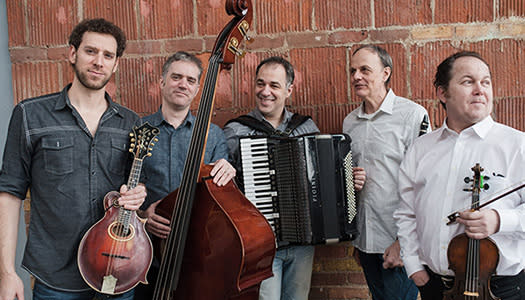 We are currently at capacity on this show.
We will probably have a handful of standing room tickets available at the door though.

For over 20 years Toronto's Beyond the Pale has been making its distinctive brand of boundary-busting Eurofolk fusion. Inspired by Klezmer and Balkan styles but influenced by everything from jazz and classical music to bluegrass, newgrass and reggae, Beyond the Pale's music traverses a vast and exotic musical landscape, bound by no particular idiom and shaped by many. Their stellar musicianship, meticulous dynamics, adventurous compositions, and inventive arrangements of traditional material make them one of Canada's most innovative acoustic ensembles. Though individual virtuosity abounds within the group, the collective sound always takes precedence, conveying the deep and generous bonds of creativity that unite these longtime collaborators.

Beyond the Pale has performed at festivals, theaters, and clubs across Canada, the U.S., Europe, Australia and Brazil, including the Governor General's Performing Arts Awards, NY's famed Carnegie Hall, and the Jewish Culture Festival in Krakow, Poland. The group celebrated its 20th anniversary in 2018.

Throughout their career, Beyond the Pale has received wide critical acclaim and a number of honors for their recorded work on the Borealis Records label. Their latest release, Ruckus, received two nominations from the Canadian Folk Music Awards, increasing the band's career total to seven CFMA nominations, including three wins. With an equal mix of genre-bending original compositions and creative arrangements of traditional material, Ruckus is a richly textured album that captures BTP's range from delicate chamber-folk to exuberant, village-style dance rhythms.