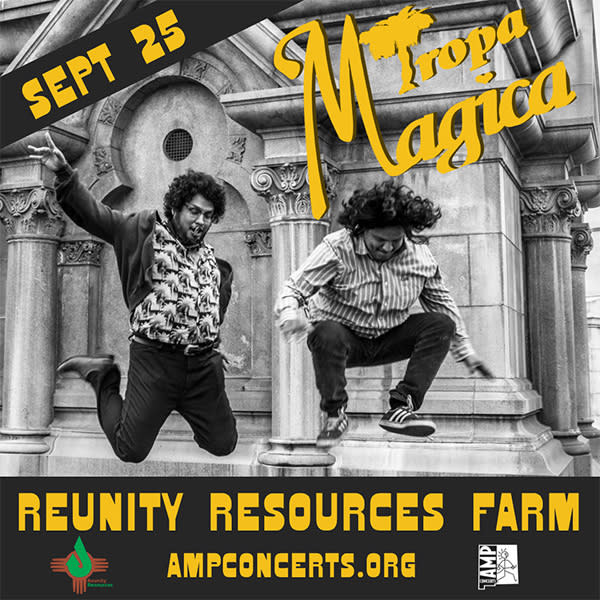 This concert will close out the Reunity Farms Fall Fest. Find out about the other great events happening at Fall Fest!

"Invigorating," "brilliant" and "charismatic" are just a slew of the adjectives used to describe Tropa Magica. "The East L.A. duo made a name for themselves by combining alternative, grunge, and psychedelic rock with cumbia" (Spin magazine).

Having toured nationally and on multiple southwest and west coast tours, they have supported established acts such as Bomba Estereo, Molotov, and comedian Felipe Esparza. The band has boldly and successfully taken on larger LA stages at venues such as The Microsoft Theater, El Rey Theater and The Hollywood Palladium. In 2018 and 2019 Tropa Magica performed at So-Cal festival favorites Desert Daze and Tropicalia. At the end of 2019, the band self released a limited edition 7-inch vinyl EP, Smells Like Cumbia, featuring Nirvana songs as cumbia renditions.

Despite the pandemic, 2020 and 2021 were busy years for the band. Unable to tour, the band has come up with new and creative ways to self-release and promote their sophomore LP Tripiando Al Infinito En Mi Recamara. They landed placements on Netflix's "Gentefied" and Felipe Ezparza's "Bad Decisions" comedy special, and also released a free mobile video game showcasing some of the songs from the album.

In 2022 the band released its third studio album, Tropa Magica III. It was written hundreds of miles apart in different states by brothers David and Rene Pacheco. David, residing in New Mexico, emailed Rene tracks, and via emails they mixed and mastered this new album. Originally meant to be demos, the brothers decided to release the tracks in their "lo-fi" state in order to remain truthful and reflecting the times in which it was written. Unlike previous albums, some of these songs first started off as commissions that David wrote for patrons in order to make some extra cash while unable to tour during the pandemic. What results is a Tropa Magica album that has less production, but instead caters to its audience and retains a more coherent and unified Tropa sound.

Nocturnal Planet will open the show.