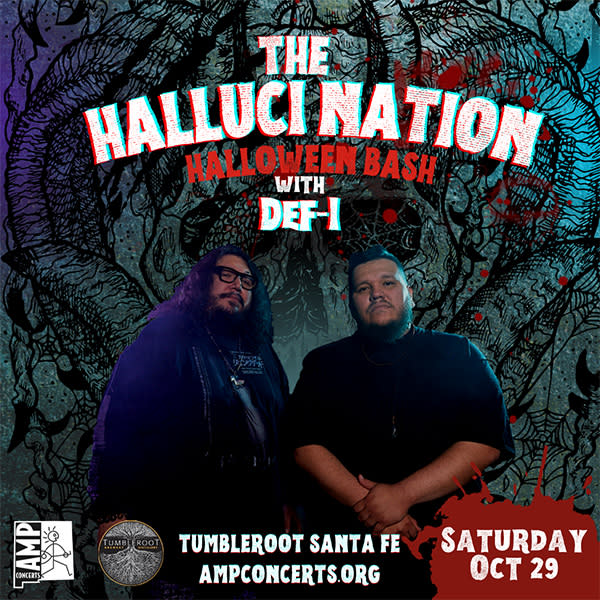 Halloween Weekend Bash!!
Costumes or come as you are!

The Halluci Nation is real.

As they enter a new cycle, Bear Witness and Tim "2oolman" Hill of A Tribe Called Red are reintroducing themselves as The Halluci Nation, to reflect the evolution of their music and mission. The Halluci Nation takes its name from a phrase coined by John Trudell to describe the vast global community of people who remember at their core what it means to be human. As a visionary artist and activist, Trudell recognized the connection between his accomplishments and what ATCR did intuitively through music and art.

Trudell's voice was the first heard on Tribe's last record, We Are The Halluci Nation, and will, fittingly, be the first you hear on The Halluci Nation's upcoming record, One More Saturday Night. The album is a love letter to the Electric Pow Wow gatherings launched at Ottawa's Babylon nightclub in 2007. It represents an imagined denouement to the biweekly Saturday-night parties that ended abruptly in 2017, without ever getting the proper send-off. One More Saturday Night thus pays homage to the parties' energy and momentum that elevated The Halluci Nation to this pivotal point in their career of fully mastering their own music style while also moving beyond club music; or "mixing dance music with dance music," as Bear Witness succinctly puts it.

"We wanted to pay homage to the Electric Pow Wow and wrap that whole decade of experience up and close the cycle, and in doing so give direct coordinates of where the future was headed. In a nutshell, that's what this album is about," says Bear. "We just wanted to make a party record, as well, one that people could dance to while still having the strong message we are known for." 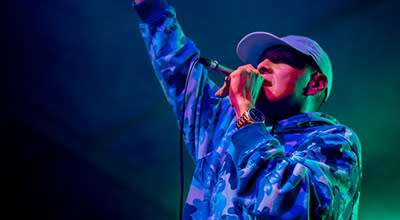 Diné artist Def-i continues to carve out an original niche from introspective and poetic Hip-Hop. Hailing from Albuquerque and emerging from the underground indie rap circuit, Def-i's eclectic repertoire has provided him with much success and opportunity. Def-i's latest album is Water Edges.