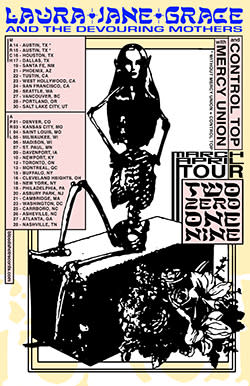 Laura Jane Grace & the Devouring Mothers are Laura Jane Grace, Atom Willard, and Marc Jacob Hudson. Grace is a musician, author, and activist best known as the founder, lead singer, songwriter, and guitarist of the punk rock band Against Me!. Willard, also of Against Me!, is a drummer who has played in iconic punk bands such as Rocket from the Crypt, Social Distortion, and The Offspring. Devouring Mothers bassist Hudson is a recordist and mixer at Rancho Recordo, a recording studio and creative space in the woods of Michigan, and the sound engineer for Against Me!.

To say musician, author and activist Laura Jane Grace has had a defiant career would be the understatement of the year. Whether being accused of leaving the DIY punk scene to pursue a major label career over a decade ago, or courageously challenging people's conceptions of gender identity with a bombshell Rolling Stone article, Grace has remained a daring and influential cultural figure in her over 20+ years of creating dynamic art across various mediums.

Jersey City, NJ's Mercy Union is the brand new rock quartet featuring Jared Hart of The Scandals and Benny Horowitz of The Gaslight Anthem, as well as Rocky Catanese (lead guitar) and Nick Jorgensen (bass). Over their countless meetings in the shadow of Manhattan in Jersey City, the four members pushed their creative limits through endless riffs and backbeats, and in the process, the band was born.

Appearing in various forms in the Philly DIY music scene since 2015, the post-punk trio Control Top is a tribute to persistence and evolving through doing. Amid periods of dormancy, stylistic forays and lineup changes, singer/bassist and founding member Ali Carter was determined to keep the project going after the release of the band's demo tape. In 2017, she recruited drummer Alex Lichtenauer (HIRS, Get Better Records) and guitarist Al Creedon (Bleeding Rainbow, I IM EYE MY). Together, they forged a clear identity, blending diverse tastes to create music for a time beyond despair and naïveté.