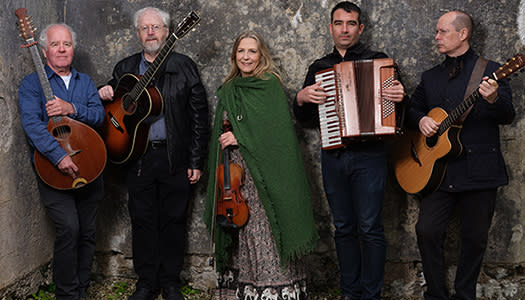 Tonight's show will be going forward as planned.  Altan are in New Mexico and looking forward to performing for everyone!

No Irish traditional band in the last dozen years has had a wider impact on audiences and music lovers throughout the world than Altan.

With their exquisitely produced award-winning recordings, ranging dynamically from the most sensitive and touching old Irish songs all the way to hard hitting reels and jigs, and with their heartwarming, dynamic live performances, Altan have moved audiences from Donegal to Tokyo to Seattle. Throughout, there has been the unwavering commitment of the band to bringing the beauty of traditional music, particularly that of the Donegal fiddlers and singers, to contemporary audiences in a way that brings out all its qualities and destroys none. In fact, Altan have always believed that Irish traditional music is a modern music in every sense and its growing influence and popularity have proved them right.

The seeds of the band lie in the music and fun of gatherings and sessions in kitchens and pubs in Donegal where virtuoso music was heard in an atmosphere of respect and intimacy—it is here that the band's heart lies still whether they are performing on TV in Australia or jamming with Ricky Skaggs on the west coast of the United States.

In spite of a hectic touring and recording schedule, Altan continue fresh in their vision of bringing the beauty and joy of traditional music to audiences everywhere, and have always promised themselves to continue as long as it's fun—fortunately, it still is.